The 10th IEEE International Conference on Industrial and Information Systems (ICIIS) 2015 organized by the Department of Electrical and Electronic Engineering will be held from 17th to 20th December in the Faculty of Engineering.
Read pdf here

The paper titled "Numerical Simulation of Alkali Aggregate Reaction in Concrete using General Purpose Finite Element Program” jointly authored by Mrs. C.K. Pathirana, Dr. A.P.N. Somaratna and Mr. H. Abeyruwan has been awarded the above award for 2012 at the 106th Annual Session of the IESL. 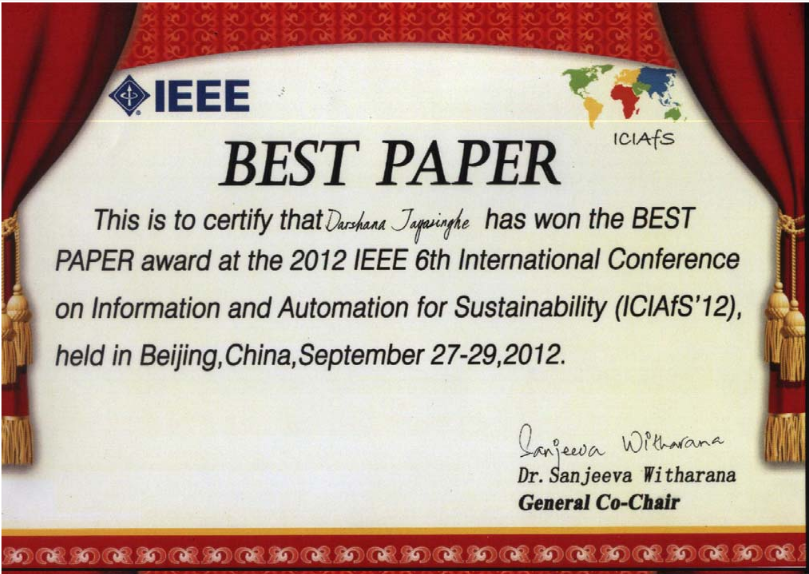 Mr. Darshana Jayasinghe won the best paper award at the IEEE, 6th International Conference on Information and Automation for Sustainability (ICIAfS'12) held in Beijing, China for the paper titled “Constant Time Encryption as a Countermeasure Against Remote Cache Timing Attack”. The paper was co-authored by Roshan Ragel and Dhammika Elkaduwe. Mr. Jayasinghe was attached to the Department of Computer Engineering as a temporary assistant lecturer during which time he conducted this research. He is now reading for his PhD at the University of New South Wales, Sydney, Australia.

The paper proposes a method of scheduling instructions of the AES (Advanced Encryption Standard) algorithm in such away that hides the memory access time from observers. As a result encryption takes a constant time and hence can withstand remote cache timing attacks. 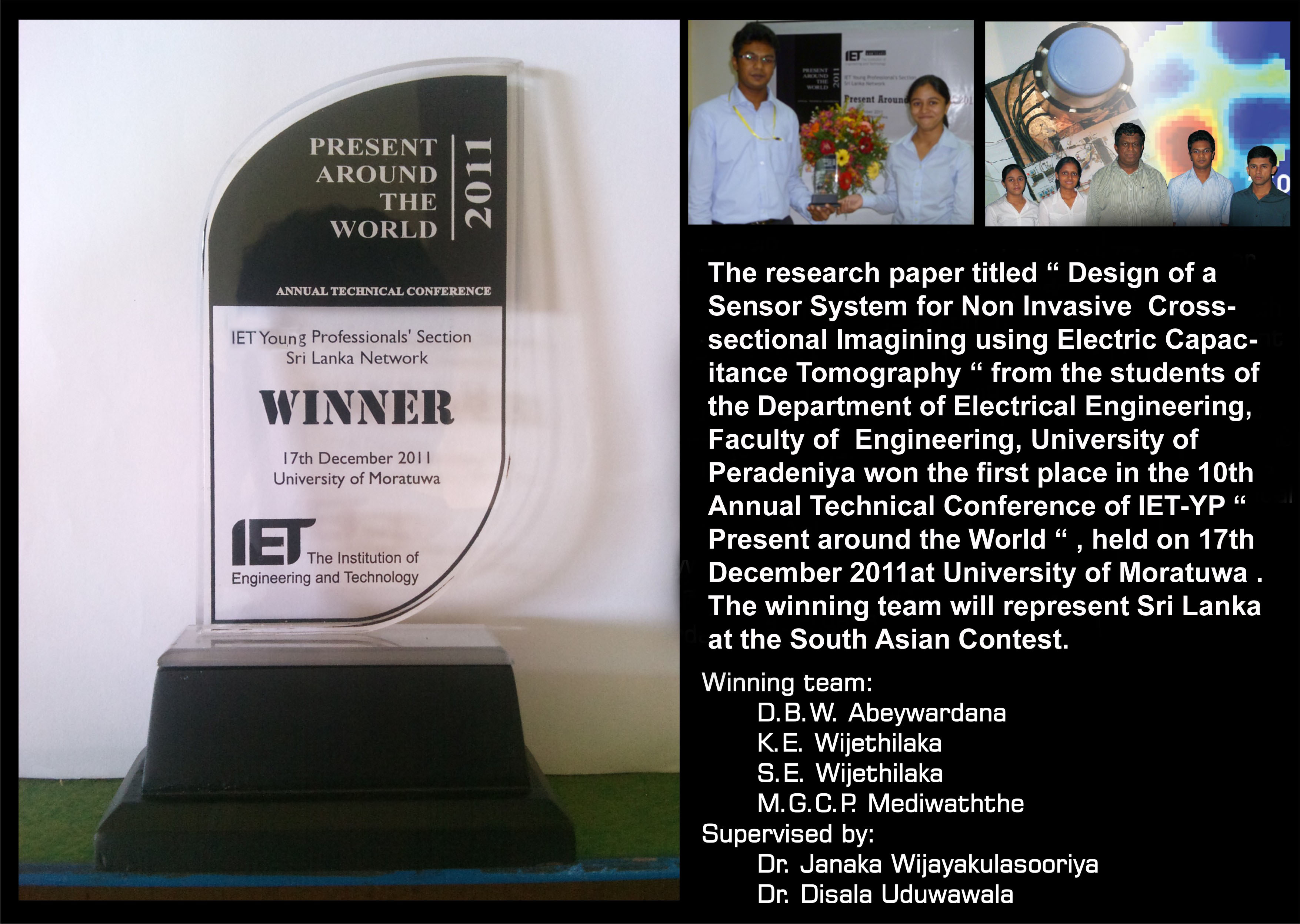 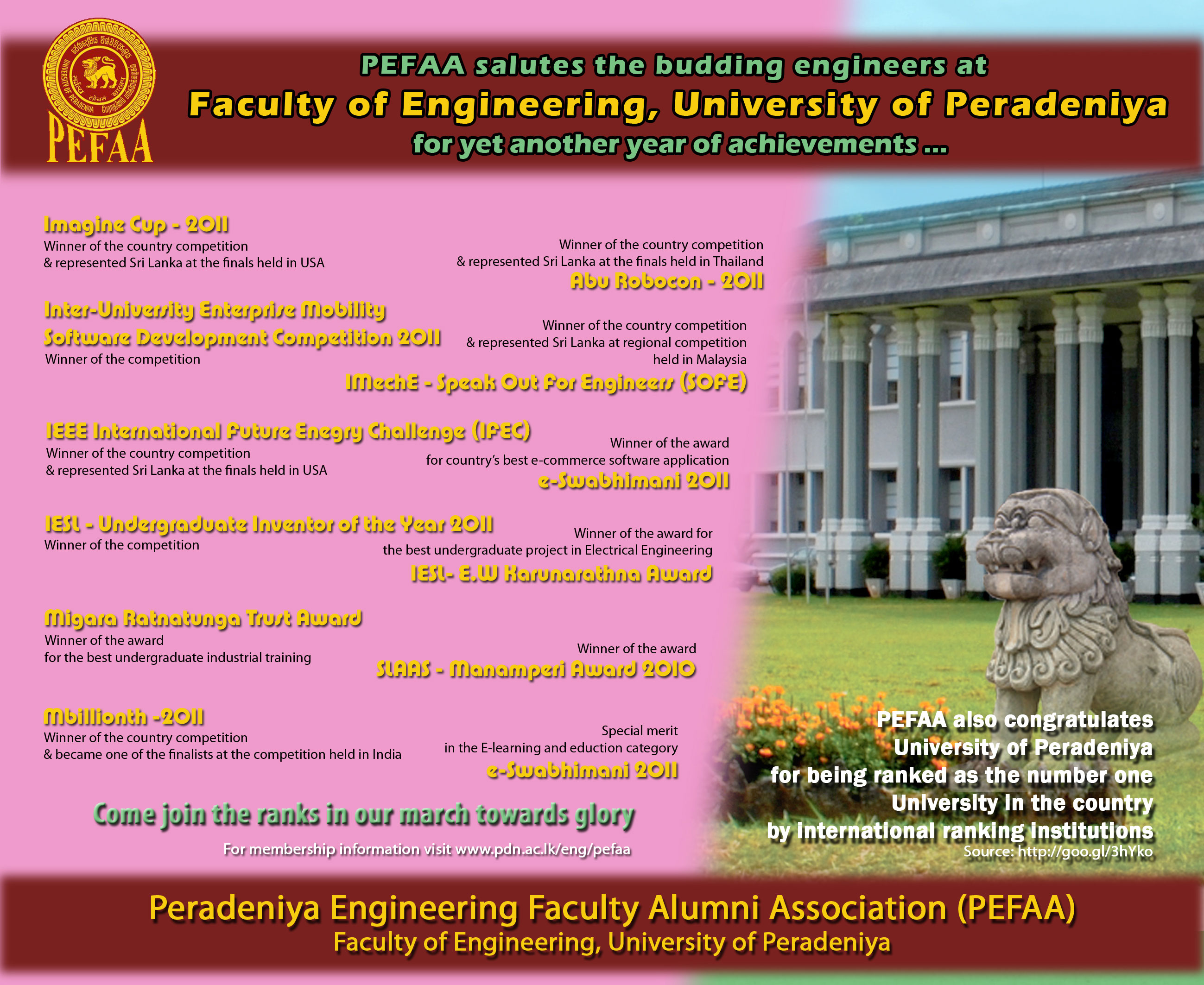 Students of the Faculty of Engineering won E W Karunaratna Award for the Best Undergraduates Project in Electrical Engineering 2011 of the IESL. The competition for the award was held among the project groups of all Engineering Faculties in the country.

The Winning Groups are,

The team from the Department of Computer Engineering, Faculty of Engineering was named the winners of the competition Inter-University Enterprise Mobility Software Development Competition 2011, jointly organized by Sri Lanka Association of Software and Services Companies (SLASSCOM) and Motorola Solutions, held on the 6th of October 2011 at the School of Computing, University of Colombo. The competition was participated by all the State Universities and many University Affiliated Colleges in the country. Final round of competition was held among 16 finalists and four teams were from the Departments of Computer Engineering, and the Electrical & Electronic Engineering of the University of Peradeniya. 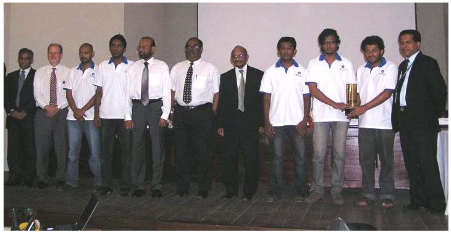 The members of the winning team are P.M.U.C.B. Senanayake, E.A.P.S. Rahal, R.B.M.R. Rajapaksha and H.H.T.S. Herath and the team was jointly supervised by Mr A.Weerakkody of Motorola Solutions and Dr D. Elkaduwe of the Department of Computer Engineering.

The winning project was titled Greenhouse and Agricultural Management System. It is a complete Greenhouse Management system with extended capabilities to manage plantations. It includes an inventory control system, HR Management system as well as Preventive Maintenance system for plants and assets. It differentiates itself from other such systems by this comprehensive functional coverage as well as the mobility element that had been the guiding principle in the project.

The faculty students have again demonstrated their talents and professionalism at the highest possible level in the country, reaffirming Faculty’s leading position in the field of Computer Engineering.

I am pleased to announce that the following students of our faculty won cash prizes and certificates in Migara Ratnatunga Trust Awards for Best Undergraduates Projects in Industrial Training 2011 at the competition held at the Institution of Engineers Sri Lanka. 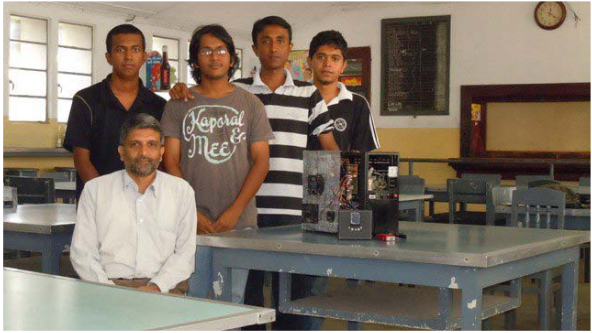 The winning Team: The members of the team: S.M.K.B. Samarakoon, H.S. Jayakody, P.S.N. Perera and R.R.S. De Bulathge and the Faculty advisor is Dr. S.G. Abeyratne of the Dept. of Electrical and Electronic Engineering.

A team of four Final year Electrical and Electronic Engineering students has been selected for the final round of the ‘International Future Energy Challenge’ (IFEC). This is a major international competition held every two years, which is sponsored by the Institute of Electrical and Electronic Engineers (IEEE) and open for universities around the globe.

The proposal by the team on “Li-Ion battery charger for automotive and renewable energy applications’’ was selected for the first round. All 4 team members attended the workshop held in parallel with Applied Power Electronics Conference (APEC) in Texas, USA on the 6th of March 2011. After evaluating the progress of the project, the organizing committee has finally selected 7 teams to compete in the final competition to be held on 22nd and 23rd July, 2011 in Michigan, USA. The team from the University of Peradeniya is also among the 7 selected teams. 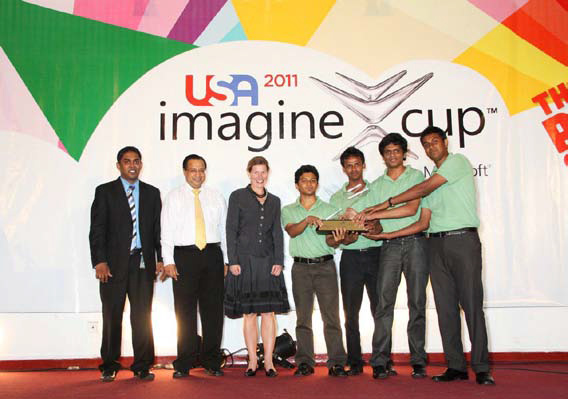 Perasoft Team from the Department of Computer Engineering, Faculty of Engineering, University of Peradeniya won the first place at Sri Lanka Finals of Imagine Cup 2011 competition held on 27th of May 2011.

The winning team comprised of students Lahiru Senadheera, Madusanka Dasanayake, Lakshita Herath and Dinushan Samarakoon. Consequently, and they will represent Sri Lanka in International Finals of Imagine Cup 2011 in New York this year. The winning team was coached by Dr.Dhammika Elkaduwa and Dr Roshan Ragel of the Computer Engineering Department.

The competition was intense and was participated by UCSC, SLIIT, Informatics, CSE (Moratuwa), IT (Moratuwa). First runner up and the second runner up teams were from Informatics and University of Moratuwa respectively.

One of the four technical papers presented from our faculty at the Fifth International Conference on Information and Automation for Sustainability (ICIAfS2010) won the best student paper award for the ICT & Social Transformation Track. This paper, titled Converting Printed Sinhala Documents to Formatted Editable Text, was co-authored by Shahina Ajward, Nalani Jayasundara, Sarasi Madushika and Roshan Ragel of the Department of Computer Engineering.
Visit ICIAFS Here

Copyright © 2015 - Faculty of Engineering - University of Peradeniya - All Rights Reserved